Economic growth does not have to come at the expense of the environment. Sustainable technologies (such as renewable energy, energy efficiency, sustainable mass transit, electric vehicles) are also extremely beneficial to the economy. For example, the renewable energy industry employs over 500,000 people in the United States. The coal industry is responsible for under 90,000 jobs in the US. In addition, the cost of renewable energy, like solar and wind, is lower than coal (especially when looking at the levelized cost of energy), as depicted in this chart:

A good example of eco-environmental sustainable growth can be seen clearly at the national level. Economic growth is beneficial and necessary for both industrialized and developing nations; as modernization (cities, national infrastructure, vital services, etc…) significantly improves the quality of peoples’ lives.

Please see: Renewable Energy JOBS are UP; and RE cost is down

Modern, 21st-century sustainability technologies are simply more energy-efficient and cost-efficient than their 20th-century fossil-fuel-intensive counterparts; as evidenced by hybrid and electric vehicles (EVs). EVs and hybrids get greater MPGs with greater fuel efficiency; providing much more savings (and responsible environmental safety as well), than all transportation options relying on more polluting vehicles running only on internal combustion engines (ICE vehicles).

EVs generate much less CO2 and other GHGs than ICE vehicles; especially when EVs are charged with electricity from a municipal grid powered with low-carbon energy sources. There's also savings on maintenance costs, in addition to savings on fuel and much lower emissions, with EVs and hybrids compared to ICE vehicles (even when an EV is more expensive to purchase than a similar ICE vehicle); as illustrated in this chart comparing the total cost of ownership for a Chrysler Pacifica plug-in hybrid (PHEV) vs. ICE equivalent minivan:

The significantly greater long-term, sustained economic benefits of, and opportunities provided by, modern, sustainable technologies are true for every technology that uses clean energy instead of dirty fossil fuels. The economy grows more as companies' carbon footprints are reduced, fewer natural resources are used, the environment is treated with care; and more efficient products, as well as sustainable jobs, are developed.

Economic growth only TRULY happens (long-term) with sustainable technologies, which promote both economic growth AND environmental protections. If the economy has boom cycles due to environmental deregulations which allow coal, oil, gas, and petrochemical companies to avoid best environmental practices - how is that not counter-productive and a negative strategy overall?

Let's say one person in the community gets wealthy due to loosening regulations on fossil fuel development, while another deals with damage due to the same deregulation. For example, in the case of a mishap in fracking or drilling when there are deregs allowing for booming fossil fuel business, but also causing destruction due to lax environmental standards. This is seen in: us-oklahoma-drilling-blast/five-missing-after-oklahoma-oil-and-gas-drilling-site-explosion.

The costs (negative externalities; costs to public health and the environment) of damage due to fossil fuels are increasing; costs of repair, cost of clean-up for environmental pollution, and/ or medical costs due deregulation & increased pollution (not to mention loss of life and personal injury in fossil fuel development and production), global warming, less clean water, air, land etc...

These costs associated ONLY with fossil fuels and NOT with renewable energy, increase when environmental deregulations continue to be given to what should be highly regulated fossil fuel industries. The federal, state, and private resources required to deal with the many problems associated with the deregulated fossil fuel industry offset any short-term economic gains. With clean energy and energy efficiency job growth and economic investment there is sustained long-term growth, without the abundance of negative externalities that come with fossil fuels.

Isn't it a better idea to focus on a sustainable social business growth model vs. analyzing adjusted gains due to continual subsidies to fossil fuel companies; and deregulating industry to help fossil fuel intensive companies in the stock market? 10% of the richest Americans own 84% of all stocks in the stock market.  A much better indicator of economic health is the job market, and, in fact: jobs in clean energy are up to 10 times higher than jobs in fossil fuel industries.

For example, take this chart which compares US jobs in solar (& wind energy) v. jobs in fossil fuels (& nuclear): 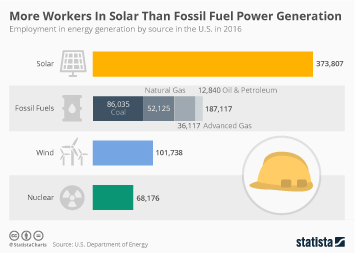 An article from the Earth Institute of Columbia University looks at the need for combining the ideas of environmental sustainability and economic growth. Here, the author specifically examines the economic opportunities created with environmental regulations>>>

“Critics pointed to a contradiction that they said the corporate world had been unable to resolve: how to assuage the appetite for economic growth, based on gross domestic product, with the urgent need to check carbon emissions. “It’s truly a contradiction,” said Johan Rockström, director of the Potsdam Institute for Climate Impact Research. “It’s difficult to see if the current G.D.P.-based model of economic growth can go hand-in-hand with rapid cutting of emissions,” he said.”

I find this dialogue a little amazing since it completely ignores the history of America’s success in decoupling the growth of GDP and the growth of environmental pollution. This fact of American environmental and economic life began around 1980, a decade after the creation of the U.S. Environmental Protection Agency (EPA) and continues today. It’s really quite simple: with public policies ranging from command-and-control regulations to direct and indirect government subsidies, businesses and governments developed and applied technologies that reduced pollution while allowing continued economic growth...

Environmental protection itself contributes to economic growth."     FROM -  blogs.ei.columbia.edu/economic-growth-environmental-sustainability Vauban and the Plus-Energy Sun Ship

Vauban is an exemplary sustainable town and a zero-emission district. Most energy for buildings is from rooftop solar... Lower your carbon footprint, save energy, and help the environment. Here are 12+ actions for sustainable individuals... 5 Categories of Change in Climate Clean Energy Jobs are UP, and RE cost is down

Clean Energy JOBS |  The future of employment in the energy sector is in clean energy, energy efficiency, and renewable... Developing Microgrids |  As African nations push for rural electrification, many look to microgrids as a sustainable... Hydrogen (H2) and the Clean Energy Transition |    Hydrogen created with clean energy is one of the most promising... Plan for the Expansion of Smart Meter Infrastructure