Clean Water from the Sea |

Desalination represents a significant strategy among the various solutions to the world water crisis; along with wastewater treatment/ treated wastewater infrastructure, and mass distribution of water filters to the poor, especially in 3rd world countries (and low socioeconomic areas in general). Desalination is a current technology that helps provide vital clean water to people globally. According to statistics from Our World in Data:

The largest ocean desalination plant in the Western Hemisphere [as of the date in this article] is open in Carlsbad, San Diego, heralding what may be a new era in U.S. water use.

Global desalination output has tripled since 2000: 16,000 [large and small-scale] desalination plants are up and running around the world [now, a few years after this article was originally published, it's over 20,000], and the pace of construction is expected to increase while the technology continues to improve. Desalination is ripe for technological improvement. A combination of sensor-driven optimization and automation, energy-efficient technology that is said to nearly halve energy consumption, plus new types of membranes, could eventually allow for desalination plants that are half the size and use commensurately less energy. Among other benefits, small, mobile desalination units could be used in agricultural regions hundreds of miles away from the ocean, where demand for water is great and growing. Already, some 700 million people worldwide suffer from water scarcity, but that number is expected to swell to 1.8 billion in just 10 years. Some countries, like Israel, already rely heavily on desalination; more will follow suit.

10 miles south of Tel Aviv, Israel, a vast new industrial facility hums around the clock. [The Sorek desalination plant in Tel Aviv] provides 20% of the water consumed by the country’s households. Thanks to a series of engineering and materials advances, however, it produces clean water from the sea cheaply and at a scale never before achieved, demonstrating that seawater desalination can cost-effectively provide a substantial portion of a nation’s water supply. 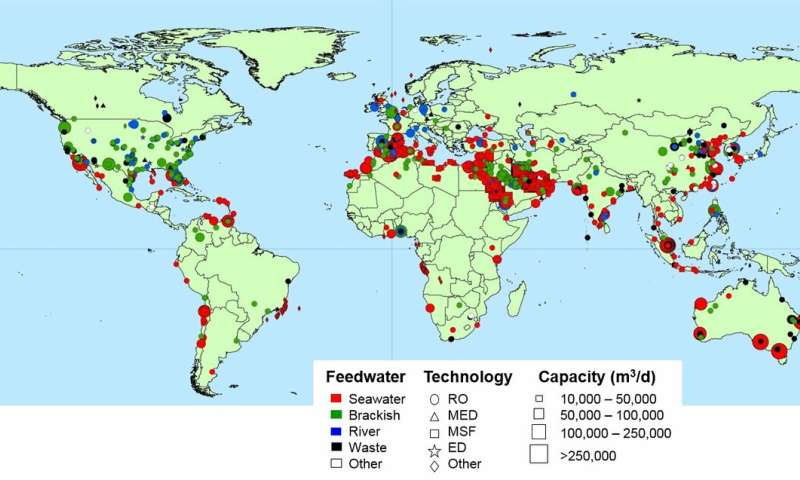