People-centered smart cities are cropping up worldwide. They only account for 2% of the world's landmass but are home to most of its population, energy use, and economic activity.

Cities are adopting modern clean energy technologies to become smarter, and one crucial aspect is renewable energy. Renewables can empower smart cities and help them reach goals they set for themselves. Citizens and the city benefit (as well as the planet's climate and environment) from using green energy, such as wind and solar, as well as from the multitude of recent sustainable technology innovations currently available.

It's no secret that relying on fossil fuels is unsustainable — that's why almost 200 of the world's countries have joined the Paris Accord intending to limit global warming and reduce greenhouse gas emissions (GHGs).

Here’s how infrastructure will play a crucial role in developing renewable energy in cities, and hopefully in securing the planet's future -

U.S. Government Aid in the Shift to Renewable Energy

As cities become larger and smarter, the amount of energy they use increases. As a result, governments are stepping in to provide incentives and funding to municipalities looking to shift to renewable energy. Cities are making a shift to all forms of clean energy technology in multiple economic sectors - energy, buildings, transportation, water, etc... - all types of infrastructure. 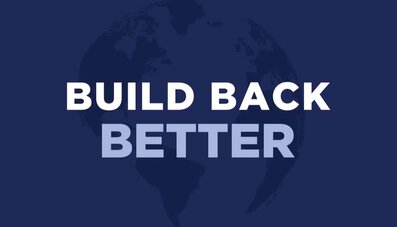 If the U.S. signs even a scaled-down version of the BBB into law, it would be considered one of the largest federal efforts to curb GHGs.

Fortunately, a smaller portion of the original BBB plan - the bipartisan Infrastructure Investment and Jobs Act (IIJA) did pass Congress and was signed into law by Biden (also in November 2021). The IIJA invests $550 billion in new spending over five years to bolster the nation's infrastructure, a very large portion of which is conventional, traditional infrastructure.

Cities worldwide do have some government support in their transition to renewable energy in some cases. In fact, globally, more than 1 billion people live in areas with renewable energy targets or policies.

However, there also needs to be more private investment to help build sustainable infrastructure.

How Cities Can Assess Energy Demand

Cities must first address their current energy usage before implementing renewable power to improve their infrastructure.

The Office of Energy Efficiency and Renewable Energy (EERE) has many online tools that local and state governments can leverage to better understand their energy consumption. For example, cities can access data that breaks down power usage by:

The data plays a significant role in helping cities determine their energy usage and shows what areas of consumption need to be reduced. This will lead to government agencies making more strategic decisions regarding renewable implementation.

Once cities understand their energy usage and the benefits of renewables, they can then focus on planning implementation to make infrastructure more efficient, sustainable, and reliable.

Here is a brief list of just a few vital infrastructure items (some of which are investments in the IIJA law, the original BBB plan, as well as a couple of novel ideas for sustainable investment) -

In the next few years, cities will have to update the power grid to prepare for a net-zero future. Strengthening and modernizing the electric grid means cities will face fewer disruptions. Increasing resiliency has to be a top priority for cities across the country.

Here are some of the ways the electric grid can improve over time and with proper funding:

Water and power are intimately connected, but what role does water play in power generation? It generates energy because it's used by thermoelectric power plants and refining and processing fossil fuels. Plants and refineries use large quantities of water to operate. For this reason, and for the benefit of public health, sustainable purification systems can help lessen these large water footprints.

Cities will have to invest in efficient water infrastructure to reach sustainability initiatives throughout all socioeconomic sectors, so that all of society benefits.

State and local highway departments have many responsibilities, from plowing roads during snowstorms to taking on major repairs or replacement projects. A significant amount of electricity is needed to power them efficiently. Think about the roadway signs, lights, rest stops, and maintenance buildings. All these factors increase energy consumption.

Some state departments of transportation (DOTs) have implemented solar in highway rights-of-way (ROW) to offset electricity costs and consumption. Additionally, the Federal Highway Administration has supported the move for state agencies to adopt renewable energy to power highways. Improving roadways will be crucial when developing renewable energy in cities.

Moving Toward a Sustainable Future

Cities must carefully plan the implementation of renewable energy sources to be more sustainable. The most important factor to consider is updating infrastructure.

Cities, states, and federal government agencies must work together to update the various aspects of infrastructure that will make cities more sustainable. It will certainly be interesting to see how municipalities use their resources to transition to renewables to sustain current and future demands.

Jane works as an environmental and energy writer. She is also the founder and editor-in-chief of

Chicago, Illinois might not be widely known as a green city, but Chicago has a citywide Sustainable Action Agenda, a...

Both nuclear and renewable energy are needed in the global energy mix to help fight climate change In order to cut down...

Eco-friendly Capital   Austin is widely recognized as a top eco-friendly city, especially in the United States....

♥♥  Employment in the clean energy sector features, first and foremost, jobs in energy efficiency; including jobs...