Block Island is now powered entirely by wind (instead of polluting diesel generators, as it was previously). Based on the success of the Block Island Wind Farm, there is about 30 GW of offshore wind projects in various stages of development off the East Coast of the United States (as of 2020). A few of those developments should be completed by 2023-2025.

BELOW>>>
Map of Proposed Offshore Wind Farms, including several that are currently being developed - United States East Coast  | FROM --  forbes.com/offshore-wind-companies-are-racing-to-develop-americas-east-coast  >>> 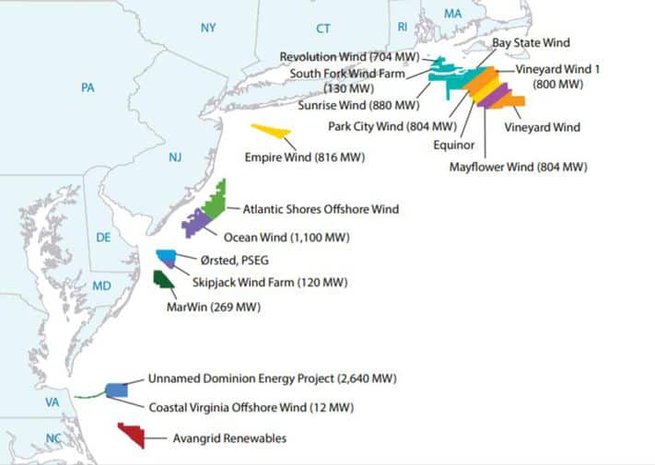 Large US offshore wind farm projects also include (this is a partial list, although these projects have made promising development):

Read a more detailed description of the Vineyard offshore wind farm, among other large-scale offshore wind projects off the East Coast, from The Boston Globe.

Other major offshore wind farm projects off the East Coast of the U.S. include more projects off New York, New Jersey, Rhode Island, and Massachusetts; as well as Maryland, Connecticut, Delaware, Virginia, and other states on the East Coast.

All of these projects each create hundreds of jobs for the local economy, many of which are permanent; while also creating a highly efficient, clean source of energy.

"According to the U.S. Department of Energy, more than 25 offshore wind projects with a generating capacity of 24 gigawatts are now being planned [now, with the Biden administration's offshore wind expansion plans, many more GW of offshore wind are planned, although the aforementioned developments have seen the most immediate progress], mainly off the U.S. Northeast and mid-Atlantic coasts. And although some of these projects may not be built, and only one commercial offshore wind farm has actually been constructed —the tiny, five-turbine “Block Island Wind” project off Rhode Island — analysts say that U.S. offshore wind is expected to enjoy significant growth in the coming decade." - quote from -.e360.yale.edu/after-an-uncertain-start-u-s-offshore-wind-is-powering-up

In comparison, the 630 MW London Array offshore wind farm powers half a million UK homes every year. (see: London array). The London Array has 175 turbines, with each wind turbine at a little more than 1/2 of the MW (3.6 MW turbines compared to 6 MW turbines) of those on the Block Island Wind Farm. The United States has a way to go to catch up with Northern Europe as far as developing offshore wind farms; and as of yet, the U.S. has only developed a tiny fraction of this renewable energy source's potential.

After buying the wind farm in 2018, the new Danish owners - Ørsted —[one of the] largest owners and developers of wind farms in the world — took over ownership from Deepwater Wind.
Deepwater Wind still operates the wind farm, and released this statement - Ørsted plans to grow Deepwater Wind’s presence in the coming years, making Providence and Boston the two major [new] hubs of the company’s U.S. offshore wind."    FROM: blockislandtimes.com/article/bi-wind-farm-get-new-owner

The Role of E-mobility Trends in Decarbonizing Transport

Decarbonizing the Transportation Sector with E-mobility | It's no secret that transportation is a major source of...

Vauban is an exemplary sustainable town, the greenest town in Europe. A “zero-emission” district in Freiburg, Germany,...

Learning From California's Struggle to Balance Decarbonization With Energy Resilience |  Since California passed the...

Employment in the clean energy sector features, first and foremost, jobs in energy efficiency (of the over 3 million...

Putting a Price on Carbon

Carbon Markets |  Carbon cap and trade systems are regulatory policies in which countries, provinces, states, and even...

Defining effective carbon taxes |  A carbon tax is a levy in countries and regions on: fossil fuel power plants, oil...