Is Chicago a GREEN City? 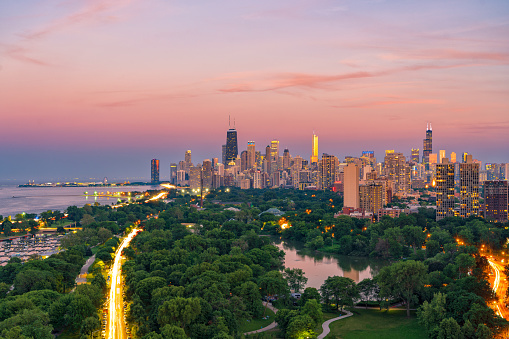 Chicago, Illinois might not be widely known as a green city, but Chicago has a citywide Sustainable Action Agenda, a vast network of sustainable mass public transit options, a high share of energy efficient buildings, and is home to a host of other green city initiatives.

CHICAGO IS - A Sustainable City

The dense city center of downtown Chicago has an extensive mass transportation network. Downtown Chicago features around 150 rail stations for its 8 'L' rail lines; and over 200 bus routes.

Chicago Transit Authority (CTA) has been able to cut its GHG emissions (GHGs) by incorporating more energy efficient transit options even while expanding.

Public mass transit options in Chicago include subways, a large network of buses, commuter and light rail trains, and 'L' cars (above-ground rail cars running on the elevated subway line). CTA has a goal to use 100% clean energy by 2040, and has been able to cut its GHGs by over 10% annually by incorporating more energy efficient transit options while expanding its city fleet.

One great example of a community park in Chicago is Lincoln Park, the city's largest park, also home to a city district in Chicago's Northside (home to over 68,000 people), and the Lincoln Park Zoo.

Chicago has benefited from green urban planning. The City of Chicago has worked hard to put in motion plans to transform the city into one of the world’s brightest examples of a sustainable metropolis.

One of the aspects of the Sustainability Action Agenda the City of Chicago has been most successful at implementing, and a major part of that which makes Chicago a sustainable city, from an energy use standpoint, is developing sustainable energy efficient buildings; another is the city’s implementation of sustainable technology with regard to retrofitting buildings.

With regard to LEED and Energy Star buildings, Chicago has the highest percentage (at over 65%) of LEED certified/ Energy Star certified office buildings among the top 30 real estate markets in the United States. LEED stands for Leadership in Energy and Environmental Design. The Willis tower (pictured here) went from LEED Gold to Platinum certification in just one year by efficiency retrofitting. The Willis Tower, the tallest U.S. LEED Platinum building, has made significant energy, sustainability, and air quality/ healthy building environment improvements.

In order to make even more advancements in residential and business buildings’ energy and water efficiency, and reduce GHGs associated with buildings in the city, the City of Chicago has launched Retrofit Chicago.

City buildings in Chicago are to be powered by 100% renewable energy by 2035 (per a resolution by the Chicago City Council). All Chicago Transit Authority buses are to run on electric energy by 2040.

The city's former Mayor Rahm Emanuel, along with Chicago Public Schools, Chicago Housing Authority, Chicago Park District, and City Colleges of Chicago, had previously agreed to a 100% clean energy program for Chicago to be implemented over the next 2 decades. This commitment makes Chicago the "largest major city" in the U.S. to commit to supplying all of its public buildings solely with renewable energy.

The city of Chicago has initiated a Sustainable Development Division (SDD) to address sustainability concerns in the development of buildings in Chicago.

“The Sustainability Division provides technical assistance for [developers]...required to meet the City of Chicago's sustainability standards, specifically city-assisted projects [and] new planned developments...[Chicago’s] Sustainable Development Division promotes development practices that result in buildings that are healthier to occupy, less expensive to operate and more responsible to the environment than traditional buildings.

Additionally, Chicago has created the Solar Express renewable energy initiative largely to advance green building in the city. The Chicago Solar Express is a public-private initiative to bring low-cost solar panels to the rooftops of Chicago- by cutting fees, streamlining permitting and zoning processes.

Since 2012, the City of Chicago and ComEd have worked with private partners and the University of Illinois, under a grant from the DOE’s Sunshot Initiative, to lower cost barriers and reduce market prices of purchasing and installing solar PV for the city.

"By committing the energy used to power our public buildings to wind and solar energy, we are sending a clear signal that we remain committed to building a 21st-century economy here in Chicago," [former] Mayor Emanuel said. The city of Chicago will achieve that commitment in a number of ways, including on-site generation and the acquisition of renewable energy credits (mostly wind and solar energy). Jack Darin, president of the Illinois Sierra Club supports the effort, "...by moving boldly to re-power its public buildings with renewable energy like wind and solar, Chicago is leading by example at a time when local leadership is more important than ever.”  FROM: goodnewsnetwork.org/chicago-city-buildings-powered-100-renewable-energy

These Chicago efforts in green building illustrate the success of Chicago Sustainability themes- substantially developing energy efficient buildings, and the retrofitting of buildings in Chicago to be LEED and Energy Star certified- and Chicago Solar Express, as well as the widespread development of renewable energy to power buildings throughout Chicago, illustrates another sustainability theme- clean energy.

Another key sustainability initiative that is helping Chicago save money and resources is the city’s wastewater management program. New wastewater treatments are assisting in the recovery of essential energy, solids, and water. These resources are then recycled and transformed into assets that can generate revenue for the city, and protect the environment.

The city has also installed 50,000 water meters through the MeterSave program, to help residents of Chicago conserve water and reduce water bills. The city has made a $50 million investment to clean and upgrade 4,400 miles of sewer lines, while also upgrading the built infrastructure, creating a cleaner, greener infrastructure. The City of Chicago is also investing in replacing and enhancing rooftops and roadways in the city to allow for stormwater to circulate back into the environment.

Chicago plans to continue to replace or build new clean green and clean infrastructure. The city is replacing sewer mains in order to control stormwater accumulation in the sewers. Sitting next to Lake Michigan and atop a swampy marshy land, water management is crucial for Chicago to become a more sustainable and resilient city.

With a history of water pollution and toxic city water, Chicago became one of the lead innovators of waste and water management by securing federal funding in 1970 to upgrade its treatment facilities as a result of the Clean Water Act. Chicago continues to lead by example while reducing its water usage and increasing its efficiency.

The city of Chicago is on the way to becoming a leader in sustainable transit. Chicago Transit Authority is committed to providing integral transit options that are greener and more sustainable. CTA is a huge contributor to the city’s sustainability movement because it helps to reduce vehicle emissions by replacing automobile trips with mass transit, reduces traffic congestion, and enables compact development.

The city of Chicago has 1,500 railcars with electric high-efficiency rails, and the new "L" cars are a new family of railcars equipped with innovative braking systems that can transfer electricity back to the third rail, which supplements power to nearby CTA trains (among other advances in the design and function of the railcars). The City of Chicago has launched a significant sustainable mass transportation campaign in order to reduce GHGs, decrease transit costs for the city and its residents, and increase efficiencies associated with transit. Chicago has 1,900 energy efficient buses that were converted to ultra-low sulfur diesel engines in March 2003; since 2007 any new buses acquired have been equipped with clean diesel and hybrid-electric engines. The city of Chicago plans to purchase additional all-electric buses.

Chicago has also made an effort to promote its multimodal transportation.  That includes its Bike & Ride program. This program was established to improve bicycle access to bus routes and rail stations. In order to do that, the City of Chicago helped develop 6,000 Divvy bikes (Divvy bikes are part of a bike-sharing system run by the City of Chicago Department of Transportation), available for rent at 580 stations across the city. CTA has also worked with car-sharing companies to make for easier access between public transit and car-sharing. The CTA’s multimodal integration addresses transit-friendly development by working with the City of Chicago and other municipalities to connect their services and destinations.