Oslo is actively pursuing a reduction of greenhouse gas emissions of 95% by 2030 (compared to 1990 levels); on the entire nation of Norway’s path to becoming a carbon neutral nation (net zero emissions). 2030 is the target year that the Norwegian parliament has set to reach carbon neutrality for the country; and capital city of Oslo is leading Norway down the green path to a net zero GHG emissions future. Oslo has fleets of green mass public transit – trams, electric buses, and ferries – that run directly on renewables; or are powered by a municipal grid fed by mostly renewable power (with a majority of energy from electricity from hydropower – but also from biomass, geothermal, solar, and wind energy, along with a share of  fossil fuels). Oslo not only sources electricity for public mass transit from renewable energy, primarily hydroelectricity, but uses RE sources to provide electricity for every other sector of the city’s economy as well.

For heating buildings within the city, Oslo primarily relies on district heating from municipal waste incinerators; and biomass-fed cogeneration plants. Biomass-fueled boilers, such as those operated in CHP power plants owned by Fortum Oslo Verme, heat many of the city’s homes and buildings, in addition to supplying Oslo with a renewable source of electricity.

One of the primary sustainability measures for any country is EV adoption; and the nation of Norway is leading the world in switching from fossil fuel based ICE vehicles to electric vehicles. Norway has the highest percentage of electric cars currently on the road of any country in the world (per-capita). Half of all cars sold in Norway in 2018 were hybrid, electric, or plug-in electric vehicles. In 2019, plug-in electric vehicles alone accounted for 56% of Norway’s vehicle sales. Quote from The Driven – “The city’s climate department publishes a quarterly ‘climate barometer’ report, and the update for Q1 2020 shows that new electric car sales within the city are hovering around 60%, with plug in hybrids accounting for another 16%. Petrol and diesel account for just 15% of new car sales.” FROM  –  thedriven.io/oslo-city-hits-new-milestone-most-electric-vehicles-per-capita. Norway’s largest, and capital city, Oslo, represents the forefront of sustainable policies regarding vehicles.

A permanent car ban in Oslo?

There is already a congestion charge for entering Oslo city center by car during the daytime. Oslo’s congestion levy mirrors London’s congestion levy for cars entering London city center. In 2015, the Oslo city council announced its intention to make the Oslo city center a completely car-free zone by 2019 (a dream that got stalled by politics) – as part of a proposed, and still potential, country-wide ban in Norway of low efficiency fossil fuel vehicles. If it does happen it will be the first permanent car-free zone in Europe, and the largest of its kind. A pioneering low-emissions zone in Europe is in London. The London congestion charge, and the Ultra-Low Emissions Zone (ULEZ) in London, like Crit’Air throughout France, is designed to help reduce greenhouse gas emissions and other pollution from inefficient fossil fuel cars; and also designed to get lower emitting, more fuel-efficient vehicles (like electric vehicles, hybrids, and plug-in hybrids) on the road in place of their dirtier-fueled counterparts. A smaller municipality which has set a sustainable example by greatly reducing vehicles on its roads is the city district of Vauban in Frieburg, Germany. Vauban has effectively reduced the amount of cars on its roads dramatically. Even Manhattan, NYC, is mandating a congestion charge similar to the one in London.

However, for now, cars are still to be found on the streets of Oslo, as a complete car ban in the city has yet to be mandated. However, Oslo is still implementing some of the sustainability measures that were to go hand-in-hand with the car ban; such as increasing the number of, and widening, bike lanes, mandating pedestrian and cycle only zones around markets and green spaces, and development of ‘pocket parks’ around sidewalks and bike lanes.

Some local businesses in Oslo, as well as some residents of Oslo and the rest of Norway, protested the proposed citywide car ban, and managed to change political will for the ban, in order to stop it for now. A bit of the story of how the Oslo car ban was stopped is seen in this excerpt from an article in Fast Company–

“Oslo first pedestrianized some streets in the city center in the 1970s, and invested heavily in public transportation in the 1980s. In 2015, when a progressive political coalition came to power in the city council, they started planning a more significant transformation. At first, they called for a full ban on cars because the majority of residents in the city center didn’t drive. But when business owners objected, worried that they’d lose customers and have problems with deliveries, the government changed focus to remove parking spots– a slightly more gradual approach. For now, there are still parking garages on the periphery of the city center.”   FROM-  fastcompany.com/what-happened-when-oslo-decided-to-make-its-downtown-basically-car-free

Oslo is doing the best it can to make transit in the city as sustainable as possible. The ‘carrot’ in this scenario is the  boost to public mass transit, and an addition of 40 miles of bicycle lanes. The ‘stick’, however, is the idea of new tax levies on heavy vehicles registered before 2014 and increased tax on passenger cars. Electric and plug-in hybrid cars have a reduced levy when being assessed the congestion charge in Oslo. The city of Oslo has begun to remove parking spaces instead of a full-out car ban for now, and is divesting from fossil fuel investments from city pension funds.

Looking at the wider picture, Norway plans to only allow zero-emission new cars to be registered in the country. The Norwegian government already offers aggressive incentives for drivers to buy electric cars.; including eliminating sales tax nationally for the purchase of some EVs, and developing free parking spaces for EVs in major cities like Oslo, as well as building free parking garages for EVs with charging stations in Oslo.

The rest of Europe is watching

It’s easy to see the attractions of a car-free zone. Apart from improvements in air quality for the city, and reductions in pollution, newly emptied roads can be rededicated as bike lanes, sidewalks, cafes, and public parks. After all, a car is the most inefficient ways to get around a city. Sustainable mass transit, like light rail and electric-biofuel hybrid buses, and biking and/ or walking, are much more sustainable options for public transit than automobiles. Other European cities like Copenhagen, Paris, Brussels, and Madrid, are watching Oslo closely. If successful, then the proposed car-free zone in Oslo could provide the blueprint for other cities to follow suit, making city centers a better place for everyone.

“Nearly half of all new cars sold here [Oslo} are fully electric. There are trams, electric buses and ferries, all running on renewable hydroelectric power. During the icy winters, a waste incinerator plant heats many of the city’s homes.

The city aims to cut emissions by 36 percent from 1990 levels by the end of next year, and 95 percent by 2030. To achieve this, the city council has introduced its own climate budget — possibly the first of its kind in the world.”   FROM-  dw.com/en/oslo-starts-2019-as-europes-eco-capital

Indicators for being a green city include local transport, biodiversity, air quality, waste management, and noise [reduction]. Oslo, with its 660,000 inhabitants, is green not only due to its low carbon footprint of 1.9 tons per capita per year, Katja Rosenbohm tells DW. As head of communication at the European Environment Agency in Copenhagen, Rosenbohm was part of the jury that awarded Oslo its new title. “They have very ambitious targets, for example of having a car-free city by 2050.” Rosenbohm also praises Oslo’s “front-running activities in electro-mobility.”   FROM-  dw.com/en/oslo-is-europes-green-capital-2019-finally

For more information on the planned car ban in the Oslo city center please see: citylab.com/transportation/oslo

The 2019 European Green Capital is Oslo

Since 2010, an annual European Green City Capital has been awarded to European cities with a population over 100,000 (the population of Oslo is about 660,000 and was the 2019 European green capital), in recognition of high environmental standards, sustainable urban development, green job creation. Additional considerations for this award include public mass transit, conservation, and biodiversity, air quality, waste management, and implementing measures to achieve a low citywide carbon footprint. Oslo has also created their own Sustainable Cities Program. Oslo has ambitious emission reduction goals, including reducing GHGs by 36% by 2020 compared to 1990 levels, and becoming fossil fuel car-free by 2050. Almost half of all cars sold in Oslo are hybrid, plug-in hybrid, or electric vehicles.

The Norwegian capital plans to cut emissions by 95 percent by 2030, despite being one of Europe’s fastest growing cities. As European Green Capital 2019, it hopes to set an example for others. 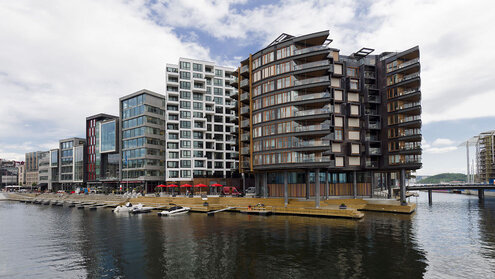 Oslo’s waterfront was once a mass of shipping containers and a vast intersection jammed with cars pumping out fumes. Today, traffic is diverted through an underwater tunnel, and much of it is made up of electric or hybrid cars. The new development has impressive environmental as well as cultural credentials, with all new buildings meeting energy efficiency standards for low energy use, explains Anita Lindahl Trosdahl, project manager for Oslo’s Green Capital year.

Her office lies further along the waterfront, just a stone’s throw from another cultural behemoth nearing completion — the new national museum. Meanwhile, new housing is shooting up across the city. These buildings aren’t just designed to function sustainably, the city council is also making sure their construction has a limited environmental impact, too.

“We’re using our market power to introduce fossil fuel-free construction,” Trosdahl told DW. “So not only will the build in its lifetime be as sustainable as possible, but also during the construction period itself.”

Read more from dw: Could oil nation Norway help save the climate?