The Latest News on Sustainability in Cities Across the Planet

Is the World Going to Meet its Climate Targets?

The international pledges are known as nationally determined contributions (NDCs)  - and can be compared to UN recommendations. The international NDCs made at the Paris Climate Accord represent a problematic shortfall compared to the reality of what greenhouse gas emissions (GHGs) the planet has in store for its future. [*UNFCCC is the United Nations Framework Convention on Climate Change]

At the same time, there is also a genuine, continuing effort by the world's countries to try to limit global temperature rise to below 2° Celsius average global temperature increase (above pre-industrial era global temperature averages) by the end of this century. 2° C is the number that represents saving the planet from the worst effects of climate change.

The UNFCCC advises all world governments that a reduction in global GHGs (NDCs) by 7.6% annually for next decade is required to meet the ambitious 1.5°C Paris target (see below). 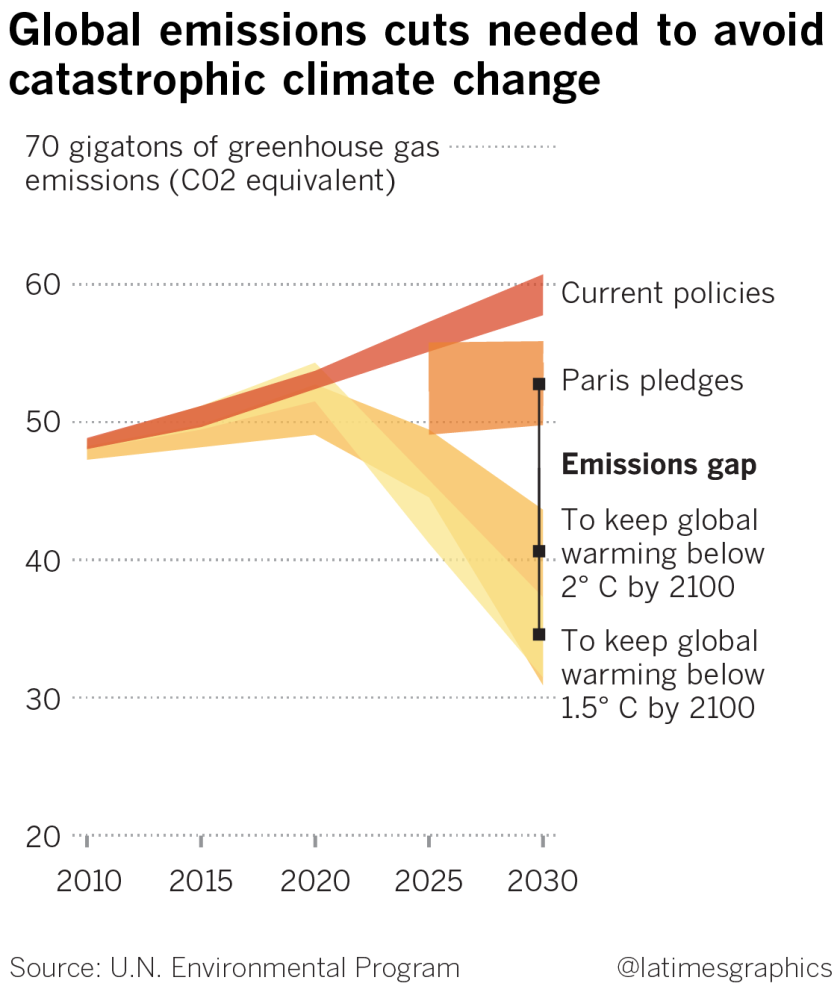 What Measures are Needed to Reach Climate Targets?

In order to prevent the most damaging effects of climate change, the international community has pledged (both in the COP21 at Paris, and in subsequent years) to increase the use of such sustainability technologies as renewable energy and energy efficiency measures; while simultaneously decreasing fossil fuel use, in order to mitigate GHGs...emissions which lead to global temperature rise.

The reality is that average global temperature rise will likely be significantly greater than what was promised at Paris - barring concerted, ambitious climate action by the international community. A 4.1-4.8°C degrees rise in average global temperatures would result if the world simply maintains the status quo. The world is thankfully not simply going to maintain the status quo in reality. This is evidenced by progressive net zero targets by the US and China (among many other nations); and best exemplified by ambitious climate action by the EU and especially Northern European countries.

The Paris pledges, as well as actions by nations, industries, and private investors, after COP21, demonstrate a genuine global effort. This global effort to reach climate goals involves the research, development, and effective use of sustainable low- or zero-emissions technologies and measures. Of course, this is great, but global temperature rise is still projected to be over the global temperature goals committed to in Paris.

In other words, a 2+°C change over the acceptable 2°C limit by the end of this century will result even if all pledges by all countries are actually met. Even in this somewhat positive scenario (and in the realistic best-case scenarios), as of now, there is still a shortfall - this NYTimes interactive piece clearly illustrates this problem -- for the original 2015 NYTimes interactive click>>> http://tinyurl.com/gct333

If all nearly 200 nations keep all of their promises from COP21, global temperature rise will be limited to just 0.035°C (0.063°F) annually (best case). Even if every government on the planet that participated in COP21 keeps every Paris promise, reduces GHG emissions as promised, and shifts no emissions to other countries; and also keeps these emission reductions going throughout the rest of the century - average projected global temperature rise will be kept to just 3°C (5.4°F) by the year 2100.

Obama's Clean Power Plan, his moratorium on drilling for oil in the Atlantic, the U.S.'s 3-year moratorium on building coal mines on federal land represented progress on climate goals that was, and still is, the best hope for America to do its part. Now that Joe Biden and Kamala Harris are the new United States President and Vice President; and Democrats are in charge of both the House of Representatives and the Senate, the United States will rejoin the international community focused on climate action. Progressive action on climate will be legislated and, in some cases, mandated, both nationally and state-by-state.

First and foremost, this means rejoining the Paris Climate Accord; and working to achieve the latest global decarbonization goals of the International Panel on Climate Change. Relevant U.S Environmental, Energy, and Climate executive administration agencies are now focused on action for sustainability agendas.

The United States government is also poised to invest substantially in clean energy infrastructure, clean energy job development, environmental protections, and in many other significant sustainable climate, energy, environmental, and economic/job growth US sectors. For a complete list of the latest GCT recommended US climate priorities, including ambitious priorities such as carbon neutrality for the U.S. by 2050 - please see - Permanent ban on new coal mines and other sustainability priorities for the United States.

The Rest of The World

China looking to shut down older coal power plants is a very positive sign. Promising signs include the global increased development and use of renewable energy and energy efficiency technologies. Energy transition progress is also seen in substantial increases in electric vehicles in Northern European nations, Asia, and much of the both the developed and developing world. Europe has been leading the way on ambitious climate action for many years.

European nations are independently setting ambitious net zero goals of 2050 (or even sooner in a couple cases). The European Union passed legislation that also targets net zero GHG emissions by 2050,. Even before President Biden announced a net zero by 2050 target for the United States, China set a net zero target of 2060.

However, optimism, in the face of the undeniable math of GHG reduction targets, reality, and the true effort it will take to reach ambitious climate goals, such as carbon neutrality by 2050; clearly tells us more needs to be done.